A cold stare, seemingly cryogenically frozen, unrelenting, unflinching, in fact the only thing her face was not ‘un’ doing was ‘un’derstanding why she should let ME into HER country, but bureaucracy is bureaucracy and a valid passport is a valid passport, so with a reluctant, venomous glance and directional head flick, she permitted me into the viper’s nest.

The viper’s nest in question being Saint Petersburg, the second largest city in Russia and a city with a surprisingly Swedish tale to tell. 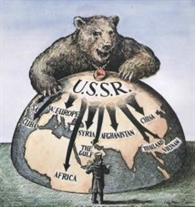 While it might be the case that Sweden has had frequent fisticuffs with the Great Bear nation, and of course the Cold War was always going to feel a smidge colder when your permafrost borders lie just a hop, a skip and a goose step away from one another, but the Swedes also do have more than a passing penchant for politics with a leftwards Leninish persuasion. A political crush is one thing, but could it really be that after a torrid affair Sweden impregnated a land which subsequently gave birth to the bully boy Russia?

This is why my Dippylomatic Duties drag me to Saint Petersburg – the hot bed where this sordid liaison might well have been consummated.

It all started, unsurprisingly, in slightly less civilised times; Swedish vikings had been traipsing all over the Eastern nations like it was their back garden for centuries – in fact it is true to say that what the Danish and Norwegian vikings achieved in the West pales into utter insignificance compared to what the Swedes got up to in the East. 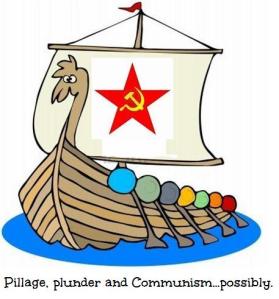 After bobbing across the Baltic Sea they poured through pre-Prussian lands, setting up base camps along the way. A notoriously hardy bunch they managed by hook, crook and double-edged axe to establish a trade route which led all the way to Istanbul and Baghdad.

As they paddled their way downstream the locals gave them a name, ‘the Rus‘, meaning ‘rowing people’ or ‘the people who row’. The word Rus appears with increasing frequency as the centuries rolled on; numerous entries in Russian, Slavic and Islamic historic texts are very much Rus-this or Rus-that…it just gets Rus-ier and Rus-ier until it eventually becomes…Russia.

Now, what of Saint Petersburg? Here’s a city which has had a fair few names changes over the years – Petrograd, Leningrad – but it started its days as Nyenskans – a small fort set up by colonial Swedes in 1611. The Russians were never overly fond of the Swedes playing ‘Empire’ and took pot shots at them pretty much from the get-go, but they were never a great threat, not great enough anyway, not until Tsar Peter…The Great. 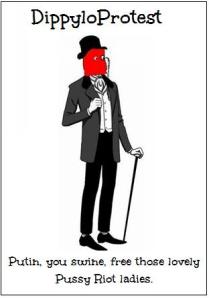 In 1703, during the Great Northern War, Peter (who probably was not considered that great at this point in history) thwarted the Swedes. For logistical seafaring reasons he relocated five kilometers upriver and just weeks after the conquest, he laid the first stones of what is now Saint Petersburg.

Lay the first stones, that is. Of course not, but who should Peter the (increasingly) Great get to build the staggering stately buildings which still today line the streets and canals? Well, he did have an awful lot of Swedish prisoners of war at his despot disposal. And so it came to be, along with Russian serfs, the Swedes were put to task with the heavy lifting duties it requires to build such a grand and imposing city – countless died in the process.

And there you have it, the Swedes may have very well embroiled themselves into Russian history, but before they were evicted, they were given a harsh lesson in good ol’ Russian hard labour.

There is more to the The Northern Plights that meets the monocle, for more DippyloInsights may I humbly invite you to my Facebook page.

A connoisseur, a charmer and a bit of a cad.
View all posts by The Dippylomat, Esq. →
This entry was posted in Finland, Gothenburg, history, immigration, Malmö, Minnesota, Norway, Stockholm, Sweden, Travel and tagged Moscow, Pussy Riot, Russia, St Petersburg, sweden, Travel, vikings. Bookmark the permalink.