My weekends arrive with a hollow thud, the vacuums between the Friday clock off and the Monday clock on resonate with my reluctant sighs and are filled with the echoes of my relentless finger drumming – I am not the kind of chap who finds idling idyllic. 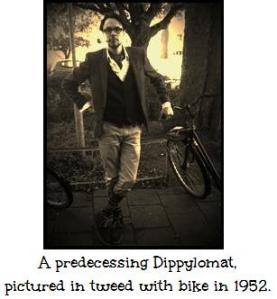 On the Saturdays I afford myself the luxury of slipping into something a little less comfortable before a Tweed-clad saunter into town to fill my bicycle basket with the forthcoming week’s rations. Saturday after Saturday and saunter after saunter, the humdrum ration routine went unchanged, until…

It was upon my approach to a central plaza that I first noticed something awry; among the pastel-coloured, tight-fitting jeans and assorted H&M androgynous leisure wear tops there was a fleck, just a fleck, but a fleck all the same…a fleck of hope, a fleck of Tweed.

Curiosity well and truly spiked I cycled closer; the fleck became a flood and the flood became a sea, all of a sudden I was surrounded by waves of people who looked like…looked like me. Looked like me but did not sound like me, I hasten to add. It turned out that I had chanced upon an event where Swedes Tweeded-up and went for a bit of a jolly on their bicycles. The Tweed Ride, as it was referred to, was to help raise money for those in less fortunate countries. Before I knew it I was considered part of the throng and, what with the novelty of my plummy English accent, asked to lead the charge. 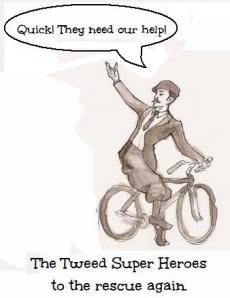 How very philanthropic of them, I pondered to myself while cycling and nodding and greeting every bamboozled bystander, these fuddily dressed fund-raisers were, after all, coming to the aid of poorer countries, many of which are poor as the result of other countries past-colonial ambitions. And, as a modicum of investigation was to later inform me, it was not just individual Tweeded twits like myself who pitch in, the Swedish nation as a whole seems to be quite the charitable collective.

In fact in recent history, Sweden has (proportionately) topped the charity charts when it comes to giving overseas aid – not a bad claim when you consider that unlike the United Kingdom and the United States, Sweden has not actually caused fair swathes of global strife.

For three years in a row Sweden was considered the country which dug the deepest in its Tweed (or otherwise) pockets. From 2012-2013 it donated 0.99 per cent of its Gross National Income, shunted to No.2 donor only by Luxembourg, which donated 1.0 per cent of its GNI. Countries which perhaps should have felt slightly more guilt-tripped into helping others like the US and the UK gave 0.19 per cent and 0.56 per cent respectively.

But the Swedes not only give in abundance, they also receive in abundance. Now, you must excuse my sudden outburst of newsbreakery, but you are catching Sweden at possibly its altruistic apex.The current Syrian crisis has created the biggest refugee crisis since World War II and among the EU countries it is ONLY Sweden which is offering permanent residency for those fleeing the conflict.

During the last eight weeks 4,500 Syrians have sought residency here, with a further 7,500 already here on a temporary permit now being allowed to stay  permanently with the additional promise of an opportunity to save family members from their shelled homeland. For the Swedes, charity really does begin at home.

So, while that fleck of Tweed may have given me hope in a country so normally bereft of weekend whimsy, it may have also given an awful lot more hope to countries bereft of any whimsy and water.