Oh curses, I am going to be late. I’ve not had this suit laundered since Remembrance Day and it looks like I wore it to wade through a bath of corgis. I am not even sure of where I am going, but all will be tickety boo, I’ll just follow the masses, the masses of solemn, stoney faced Swedes, wearing their Sunday Best and silently shuffling towards the sounds of tolling bells.

But there are no masses, there is no solemness, no stoniness, no shuffling and no tolling bells; no one is even wearing their Sunday Best, they are, just like this time last week, wearing their Wednesday Worst. I double check my diary, yes, it is October 3rd.

Even the newscaster seems to have omitted the relevancy of this day from the top story agenda. I may not be entirely au fait with the sing-song Swedish vernacular – only a Swedish anchorman can make a bombed body count sound like a Nordic nursery rhyme – but no, I would have spotted it, I would have spotted it by the grainy, sepia, stuttering film footage which would have certainly served as a backdrop.

Today is just a reminder that the Gregorian calendar is peppered with dates loaded with sobering spectres of the past.Take 9/11 for example, who can fend off the gravitas of that anniversary, the day that wretch William Wallace and his cohorts slain thousands of English infantry at the Battle of Stirling Bridge on the 11th September, 1297? 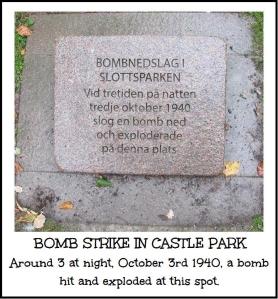 And now today, is it really only me that remembers the significance of October 3rd – the anniversary of The Day the Second World War Came To Sweden.

Peace-loving Sweden opted, of course, for neutrality; but, let this Dippylomat tell you what passes for neutrality in Sweden, may not necessarily fit with your perceived definition of neutrality, that being ‘staying well out of it’.

Reigning king Gustaf V knew exactly where his loyalties lay…with the Nazis – the silly old sausage. So sympathetic and socially entwined was he that pre-war days were all sherry and sodomy with the SS, with continued support during the war with private letters to Hitler congratulating him on his victories.

But the toothless sentiments of senile old racists aside, what exactly did those Swedes do 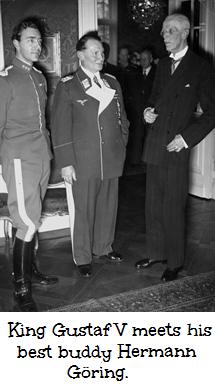 under the guise of ‘neutrality’? Well, quite frankly, some pretty spiffing work. Most notably, one might argue, they did more for the Jews than any other country. In 1943 they gave refuge to all but 450 of occupied Denmark’s Jews by ferrying them across German guarded waters – hurrah! In fact Jews from all over Europe found refuge in Sweden – hurrah, hurrah!

They were certainly pretty handy when it came to helping out our surveillance peeps – wonderful! In fact they did all manner of congenial acts to help the Allied Forces fight off the scallywag Nazis, right down to the nonchalant deposition of mines in its waters.

But they didn’t always get things right, sometimes they went ‘far right‘. Take for example 1941’s Midsummer Crisis when German troops stranded in Norway needed to get a bit of a wriggle on and head tank-laden to the eastern front in Finland – the most direct route being via Sweden; the Swedes should have told them to take the ‘long way around’, but instead let them travel roughshod over neutral land, thus helping the Nazi campaign – tut tut.

Such trite matters pale into insignificance when one considers how Sweden aided and abetted Germany’s war machine with the sale of 10 million tonnes of iron ore every year to Nazi weapon factories. Far cleverer people than, dare I say I, argue that if Sweden had ceased this trade then World War II might have lasted just six months – my, my Sweden, how do you live with that?

And the sour cherry on the bitter cake has surely got to be The Extradition of the Balts, when starting in 1945 the Swedish government took the decision to hand over – in the main – Latvian refugees and soldiers, who had fought the Russians tooth and nail, back to the Soviet Union to help ‘populate its gulags’. A somewhat embarrassing stain on the pages of Swedish history books, a number of those facing extradition simply chose to pop their own clogs in a bid to avoid a lifetime of borscht and beatings.

And that, my dears, is why no one really cares to remember the anniversary of the date

that the first, and possibly only, bomb fell on the Swedish city of Malmö. No one died during the micro-blitz, the bomb landed in a park just yards away from a duck pond.

A connoisseur, a charmer and a bit of a cad.
View all posts by The Dippylomat, Esq. →
This entry was posted in Denmark, Finland, history, migration, Minnesota and tagged Holocaust, Judaism, Second World War. Bookmark the permalink.