It rains. It. Never. Stops. Incessant rain. I gaze out of my window, all I see is grey and wet; the gravestone-grey sky morphs into the Sovietesque grey of yesterday’s generation’s modernity. It is like a grey wet room…a depressing grey wet room, the kind of wet room a wrongly-convicted inmate may find himself being deloused in before his shackled entry into the death row cell block.

Still, every day I shoehorn on my – now scuffed – brogues and leave the Embassy Apartments, my once proud gait has been infected with a defeatist shuffle. I cannot even boast of being a shadow of my former self. No, I am now but a stain…a stain left by my former self. This campaign is hard, and I feel like my struggles are in vain, but Sweden must be Dippylomacised, or at the very least, civilised.

I haul my loathsome self onto a bus, leaving another shred of dignity at the automatic pffting folding doors – the delivery of Dippylomacy is becoming increasingly ‘drudgey’.

But it was then, then that I saw it. Then that my woes seemingly fell through a trap door. No, it was better than that, it was like spring, but not the annual rejuvenation, more like the first spring ever, the first spring when this planet nestled upon its current axis and established the very notion of seasons – like the life-giving moment the first sunbeam graced the surface of Earth. I didn’t just see the light, I felt it…and this is what I saw:

You will, of course, be excused for not fully comprehending why such an innocuous looking public transport poster campaign would have led to such Empire enhancing euphoria. But this, my dears, is the launch of a city-wide and city sponsored campaign, a campaign to – as the words on the poster pleadingly suggest – ‘Say hello to your neighbours’. This is the dawning of a whole new epoch of Swedish culture, it is a momentous shift, a shift of tectonic magnitude – the laboured birth of the Era of Smalltalk.

It is not until one is fully ensconced in Swedish Culture that it becomes apparent quite how important Small Talk is to the folk of the Greatest Britain. From hobnobbing toffs to the chattering classes, it is a cornerstone of Commonwealth culture. But, in Sweden, you won’t hear a peep of it, and the hushed masses have never known it any other way.

In the early 19th Century, already sparsely populated villages, underwent a process known as ‘enclosement’. Farm land was divvied up and allocated to straw-chewing yokels in a

single large plot. A farmhouse was built on each patch and before you knew it, to borrow a cup of sugar or next door’s step ladder, you had to walk around four kilometres. In agricultural terms, the move was a success, but it was the death knell for gossiping farmers’ wives. Centuries later, and with the arable farmers descendants now herded into cities, the silence still hangs heavy in the air.

So hip, hip hoorah it is then for The Campaign, for it is the campaign that is now coaxing the Swedes to chitchat. It is going beyond organising community meetings, it is, believe it or not (and I know it will be easier NOT to believe it), teaching the Swedes the basics of casual conversation. Instructions include fundamentals, such as not to ask questions which can be answered with a ‘ja’ or a ‘nej’. 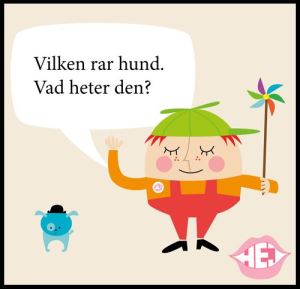 Take this for example

, this is part of the poster campaign which guides the reader through starting a conversation with a dog owner, it simply reads ‘What a nice dog, what is its name?’ As one can see, it is very much back to basics for a country which is now so technologically advanced, they seem to have left by the wayside the behavioural basics – still, at least this civility indoctrination program seems to be addressing the issue.

But there was something else to this campaign, something which led me to believe my gentry presence had finally been felt. The campaign had a face, a face that demonstrated manners, etiquette, grace and elegance. It was as if the creators of the campaign had tried to personify all these qualities, and what did this man look like? Well, in fear of sounding like I have been the victim of espionage, not that unlike my good self. Indeed, the gent they seem to have employed as ‘the face of smalltalk’, is not the tall, blond Average Swede, but rather a handsome fellow with lacquered hair, a well-waxed ‘tache, a bowler hat and a monocle…the Swedes are, dare I say it, slowly becoming…well…they are becoming, us.

I gayly spring off the bus with a born again skip in my step, now where can a gent get a shoeshiner to buff the scuffs around here?

ATTENTION BOTH THE FOREIGN OFFICE AND EMPIREES:

I am proud to announce that my translated guide to etiquette is now finally unavailable in all good book emporiums. 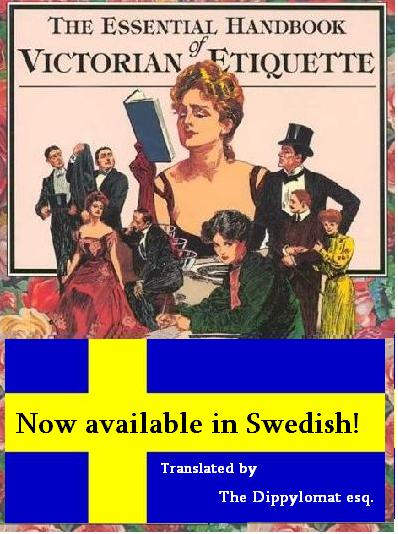 A connoisseur, a charmer and a bit of a cad.
View all posts by The Dippylomat, Esq. →
This entry was posted in Culture, Ex pats, history, Humour, Society, Stockholm, Sweden and tagged etiquette, evolution, farming, lifestyle, manners, speaking, swedish, traveling, travelling, weather. Bookmark the permalink.