Mexico? Have I lost my Elgin marbles? Have I gone, what I might haphazardly suggest the Swedes spell ‘löcö’? Before now Mexico has never really featured on my radar, I once went to an American Ambassador’s fancy dress party as an ‘illegal immigrant’, but beyond that I have paid it no mind. Nor, incidentally, has The Empire, Britannia has enough drunk, shouty, stabby people of its own, muchas gracias all the same.

Yet Mexico, it seems, has been thrust upon me, like an awkward maneuver performed by one of its working class masked wrestlers.

This came to fluorescent-stripped light one Friday afternoon whilst striding a shopping trolley up and down the aisles of my local food court. Most of the fresh foods look like they have been clubbed over the head and dragged in by a bedraggled hunter. For a fussy connoisseur, pickings are slim and mostly pickled.

Whether the Swedes had gone on a hunger strike was not clear, but what was obvious was that the store was deathly quiet, a quiet I had not heard since I squiffyly bellowed ‘You know Abba were miming, right?’ at a Swedish Embassy musical soirée.

But hold the Ericsson phone, there was life…and it was all centred in one aisle. My curiosity got the better of me and I waited for the blond/e mass to dissipate. They left behind the bare shelves of what had once been the Mexican food aisle, and I don’t mean ‘shelves’, an ENTIRE aisle had been reserved for cacti and sombrero adorned tins, jars and spice-mix boxes. Like a pack of malnourished wolves with a wild boar carcass they had stripped it bare. And sure enough, as the checkout bleeped and blöoped their items out, every basket contained at least one item from the now barren Tex/Mex shelves.

In short, I wish I knew.

No one knows, but this quite genuinely appears to be the embryonic stages of a tradition, like ‘Christmas’ or ‘colonialism’. At the very heart is the notion of ‘Fredagsmys‘ which literally translates as ‘Fredagsmys’ or, if you ask a native, ‘Friday Cosy’, a custom akin to the slightly more dogmatic and restrictive Jewish Friday tradition of Shabbat.

Everywhere else in the world it would be referred to as ‘I am Knackered and Can’t Be Bothered to Cook or Go Out Day’, but since the early 1990s some entrepreneurial Swedes have made it into a marketing Mecca – they have found a way to fleece the hard-earned kronor from the, err, fleeced pockets of the Average Swede while festering with his/her loved ones on the sofa. 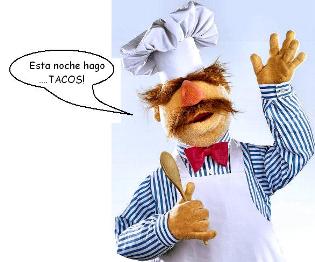 Sweets, snacks, fizzy pops and all manner of calorific mucks are consumed by the snow-shovel load, but where there is muck there is gold and the company on the winner’s podium is Santa Maria.

For all intents and purposes this Swedish-based company has snuck into homes, removed the meatballs and replaced them with the ingredients of a taco…and no one has cared, not a jot, in fact they have embraced the taco to such an extent that the day is morphing into ‘Taco Friday‘.  Every year Santa Maria makes 85 million taco shells along with 200 million tortillas..that’s an awful lot of Tex/Mex for a population of 9.5 million.

Food pundits, health campaigners, social historians are all scratching their Nordic noggins trying to pinpoint the precise origins of this weekly custom; Ladies and Gentlemen, let me come  to your assistance – The Brits have been sitting on their posteriors doing nothing but eating rubbish since records began, welcome to The New World Empire, you appear to be settling in nicely.

ATTENTION BOTH THE FOREIGN OFFICE AND EMPIREES: My name Juan, I take Dippylomat hostage…you subscribe or I break ‘is monocle.