I’ve gone for many a brisk Sunday morning constitutional through a plethora of European ‘centrum’ city streets; I have soiled the soles of my brogues as I wade through Saturday eve’s fallout of discarded kebab, burger, falafel, gyros and langos wrappers while I try and enjoy the tranquil silence – the calm AFTER the debauched storm.

But nowhere – NOWHERE – have I experienced a hush as hushed as a Swedish Sunday Silence. In most countries the Sabbath’s air is, at the very least, punctuated by the subdued nagging of a middle-aged woman trying to motivate her browbeaten husband, or her shrill, curt instruction to her children – her message is clear:

“We’re going to be late for Church.”

But Sweden, it seems, is a godless country. One particular Sunday morning ramble took me to the foot of

the 105-metre spire of St Petri, a staggering goliath of a medieval church – architecturally it is to Sweden’s Malmö what the Notre Dame is to France’s Paris. Surely here my monocled-eye would manage to spy the usual dour expression so often frozen onto anyone wearing their Sunday’s finest.

But no. No incessant clattering of pealing bells, no organ grinding out its deathly dirge, no hushed chatter of a deluded congregation – zip, absolutely nothing. As it turned out the church in question was not just ‘out of service’, it was shut – permanently.

Sure the building still looms like the spectre of Biblical-bullying bygone times, but with my ear trumpet to the studded oak door I can reveal that inside it was as quiet as a church mouse, in fact it was quieter, because the church mouse has had to relocate to find a new source of broken Communion breadcrumbs – my guess is that the mouse may now have starved to death.

Atheism may be a step forward for critical thinking, but it is a tad of a blow to Empire Builders like my good self.

Gone are the days when the British Empire could waltz into a country, shoot a few locals and scare the bejesus out of the rest with demonic tales of fire and brimstone. We could then distract them with Empire-endorsed Bible classes; while they lived in fear of plagues of locusts we could strip their land bare like a plague of, well, like a plague of locusts. We WERE better off and they THOUGHT were better off; everyone was a winner…sort of.

Things were so much easier before the scheming likes of Charles Darwin and his so-called proof there was no God foiled our modus operandi. What ‘in God’s name’ are we to do now?

At last count, 52% of Europeans believed there was a God and did things like ‘pray’ rather

than ‘go to a doctor’. Turkey, which must be very poorly by now, topped the believers chart with 95% of the Ottomans worshipping some God or other, but in fighting fit Sweden only 23% confess to a belief in God. The Church of Sweden has 6,664,064 members, of which only 2% regularly graze their knees on a prayer mat.

That’s a whole lot of people we need to distract before we plumb the depths of their reindeer stocks.

Advice to War Cabinet: Pray for a miracle.

Religion depresses me; I am off for a drink, now who serves Holy Spirits around here?

ATTENTION BOTH THE FOREIGN OFFICE AND EMPIREES: On the Seventh Day God rested, but later on in the evening he got bored and created The Dippylomat esq and instructed him to teach ‘manners maketh man.

Ergo, I hereby cordially invite you to subscribe to these Dispatches. 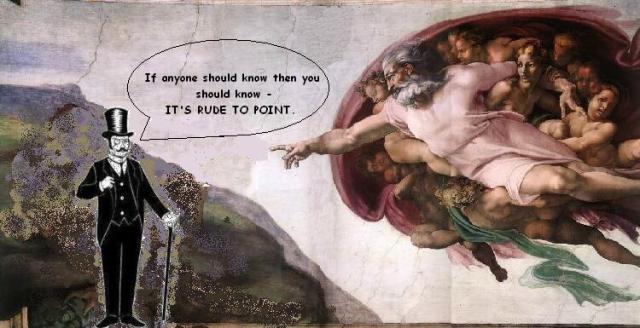