Just the other week I was relaxing in my drawing room musing that it has been almost a year now since I’ve had my bespoke brogues underneath the proverbial flat pack table that is Sweden. I have done my utmost best to assimilate myself with the strange Scandinavian ways which are practiced around my satellite English outpost.

But on reflection there was something which still bamboozled me; I have seen the consumption of copious cups of coffee that the Swedes drown themselves in on an hourly basis, I have watched in disgust as they fill their Baltic bellies with red-fleshed animals which should be caged in zoos rather than served on plates and I have recoiled in horror as plagues of pick and mixers lay bare the shelves of the numerous sweet stores. And yet still, and here’s the baffling bit, they maintain one of the highest life expectancies in the world. 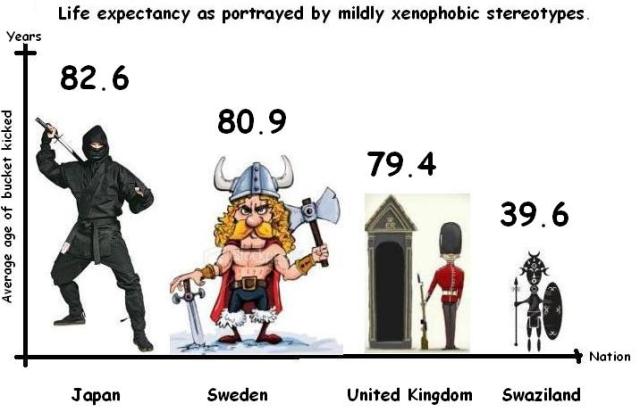 As my chart displays, it is the soy-guzzling Japanese who grace this planet the longest; the Swedes surprisingly stand at No.7 and the Brits are at a somewhat embarrassing 20th place…even the French get to live longer than we do (source) – how’s that for rubbing heart-attack-inducing salt in the wound? I was left flummoxed, until…

Upon one morning while exiting my 4th floor penthouse suite I could hear my elderly and distinguished neighbour grappling with what I believe were her crutches; I was unaware she had sustained an injury but as the Gent I was born and raised to be I came to her aid before she cluttered to the floor. It was as I approached her that I came to realise that they were not crutches she was struggling with, but hiking sticks; as she so dutifully informed me, she was off on her daily 5km walk, to which she then added: “Jag är 81, du vet?” How remarkable, I pondered to myself as she blazed off in a cloud of lily of the valley-scented dust.

And then, before said dust had settled, I was forced to stop my purposeful stride as an elderly gentleman eagerly swooshed by me on his bicycle. And this is when it dawned on me, you can eat all the deep fried wild boar, drink all the caffeine-laced beverages and munch

on all the salted liquorice your Scandinavian teeth and tummy lining can handle, just as long as you do so after burning more calories than a winning marathon runner after his ‘lap’ of honour. Not rocket science, I know, but how many of my fellow Empirees have a grandmother who boast they USED to run for their county but who now think that exercise is no more than holding a bingo card aloft and bellowing ‘house’. How many British grandfathers do they know who, as was ably demonstrated by a Swedish gent as if filming for ‘Last of the Summer Wine‘, rollerblade home with a weekly shop – a bulging carrier bag in each hand no less?

The Swedes are a relentlessly healthy bunch of scallywags and we should curse them for it – it makes us look bad and it may give them the edge when the conflict kicks off. If the greying generation is this fit then just imagine what the younger ones are like? 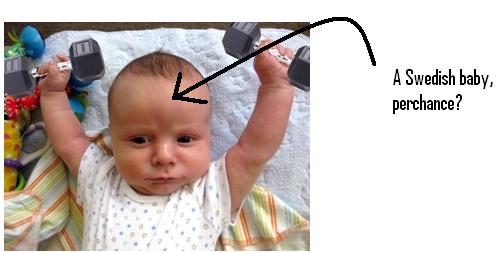 Advice to the War Cabinet: Use anti-exercise machine missiles and NOT anti-tank missiles.

ATTENTION BOTH THE FOREIGN OFFICE AND EMPIREES: May I prescribe one Dispatch per week, to be taken with a pinch of salt and a tot of sherry. 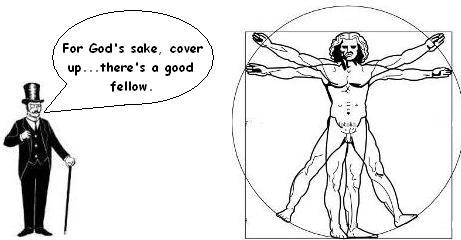 A connoisseur, a charmer and a bit of a cad.
View all posts by The Dippylomat, Esq. →
This entry was posted in diets, Ex pats, exercise, Food, France, Humour, sport, Stockholm, Sweden, Travel and tagged babies, bingo, japan, life expectancy, swaziland, swedish pensioners. Bookmark the permalink.