‘For King & Country’ – that mantra is the (partially blue) lifeblood which pulses through me, that is the reason I travel to these far-flung lands in the pursuit of Empire Building. Of course I say ‘King’ because in my humble opinion it is the kings who have built this formerly great Empire, all the Queens do/did is/was keep it tidy.

Anyway, I digress, if the Empire is to sponge up Sweden then any reigning monarchy needs to be considered – are they worthy of representing the True Crown?

When I was first posted here I was sent deep undercover; I was taught to dress and behave like a native and located in what I can only describe as a ghetto in order

to fully satiate life here. Only after I could look and feel comfortable in a jumper that most of the Civilised World would consider an embarrassing Christmas gift from an elderly aunt was I considered to be a convincing Swedish gent

During this period I was informed by my HQ that not just the city, but the very neighbourhood in which I resided was due a visit from no less than the King of Sweden. Not only does a regal visit send a shiver of excitement down my spine but this would also prove an excellent surveillance opportunity.

From my third storey vantage point I could see the road he was due to grace; I did remark as to why a King would want to soil his Royal Soles on such a ghastly and run down area, maybe it was akin to Lady Di tip-toeing over a Bosnian minefield?

I sat and waited in anticipation, I do love a royal fanfare. He was due sometime around midday; 12am came and went, 1pm and not so much as a police cordon or a Special Forces helicopter buzzing over head, 2pm and not even a sniff of a man in a suit and mirrored sunglasses talking into his lapel – had the King cancelled? Had the Royal Volvo been in a prang with a wild boar en route?

No, he had not and no it hadn’t. Later it transpired that he and the royal entourage had been, shaken a few hands, cut a ribbon and left – not a pomp or a ceremony in sight. No one other than passer-bys gave a hoot – poor ol’ Carl XVI Gustaf Folke Hubertus of Sweden.

But why such apathy?

To find out, I trawled through the Swedish Royal Family Tree; what would await me? Medieval blood feuds? Civil wars? Barbaric executions using reindeer antlers and a five-year-old herring? Possibly even tracing back the regal bloodline to the 9th century and a Viking whose name would have to be bleeped out by the BBC because it sounds like ‘#%*@’?

The tree starts like any other modern day royal family, namely princes and princesses who try to act like normal people – having jobs, driving their own cars, flushing their own toilets. But this particular family tree takes a strange curve just as the wigs are getting properly silly. All of a sudden there are fewer and fewer ‘Gustafs’ and more and more ‘Jean Pauls’, and then, like an Englishman on page one of an IKEA assembly guide, it stops.

You see, up until 18th Century the blue (and yellow in Sweden’s case) blood was running a bit thin; sure they had had their fair share of men in tights who had the thickest armour and thickest castle walls but more kings and queens were dying off than in the Russian Annual Chess Tournament.

So what did the Swedes do? The answer is the biggest FAUX PAS until Princess Diana’s chauffeur thought ‘I’ll speed up a bit, that’ll lose ’em’. Seeing as Napoleon was still all the rage back then, the Swedes kick started its defunct royal family with a man called Jean Bernadotte, born in France and a general in the French army but hey,who cares? Let’s make him the King. The House of Bernadotte reign in all its garlic-scented glory to this very day. So, who really does support the Swedish Royal Family…? 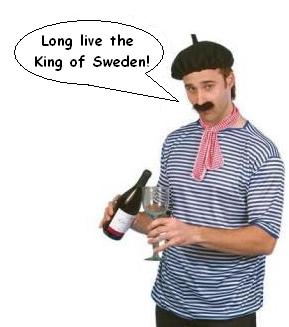 I am off to watch my ‘Highlights of the Greatest Battles – Agincourt’ DVD- don’t ruin it for me; I’ve been avoiding the result until now!

ATTENTION BOTH THE FOREIGN OFFICE AND EMPIREES: Due to an unfortunate incident while riding my boneshaker and a wild boar trampling over my internet connection, this Dispatch is late…back on schedule this Friday.

A connoisseur, a charmer and a bit of a cad.
View all posts by The Dippylomat, Esq. →
This entry was posted in Ex pats, France, history, Humour, RAF, Royalty, Stockholm, Sweden, Travel and tagged julius caeser, Napoleon, princess diana, swedish royal family. Bookmark the permalink.