How the devil am I meant to write a Dispatch about sport? My knowledge begins and ends with croquet courtesy and how to make the perfect pitcher of Pimm’s to sup while watching the cricket – a shudder runs down my spine when my Trivial Pursuit cake lands on an orange wedge question.

In my tender years, when my trouser-crease checking plumbline was an imperial foot rather than a metric metre, I knew of only one Swedish sports star, Björn Borg, so that will be my starting point – tennis.

In England the sport of kings is polo, but on Swedish turf the sport most associated with A king is tennis. It will come as no surprise that, based on appearances alone, King Gustaf V

is my favourite non-British monarch. But beyond his dapper exterior lies a little dark horse. While I find sport most unstately, if a reigning king HAS to do it, then at least be the best at it. Young Gustaf graced the world’s courts using the somewhat ridiculous pseudonym of ‘Mr G’.

Still, he did lob and smash his way into the International Tennis Hall of Fame. To be honest, if the Swedish monarchy was still headed by such a chap I’d be tempted to recommend that the British Government kept him as a figure head, just so long as he was not too vocal about his most unsavoury Nazi sympathies. But alas poor Gustaf has served his last ace, and I am sad to say that he was the last Swedish tennis player who could pass for a sporting role model.

Step forward Björn Borg; he was the golden boy, wasn’t he? He was the ‘goodie’ and the precocious John McEnroe was the ‘baddie’. How we enjoyed the battle between good and evil, night and day…or rather ‘well-mannered talent’ versus ‘petulant talent’.

It was during my in-depth research on Björn Borg

(click on these two links to see how his name directly translates) that I discovered quite what an Enemy of the Empire he actually is. I am not one to dig the dirt, although when it comes to Borg he does have a tendency to leave his dirt just lying around: reported drug abuse, a possible suicide attempt, the fact that he left his wife after impregnating a 17-year-old wet t-shirt contestant he was “judging” – the list is endless and somewhat sordid to be frank. But what he does in the privacy of his own Swedish sauna is his own business, not much that he can do will affect the Future of the British Empire….or will it?

You see, Mr Borg is now ‘big in pants’, this is not some sort of innuendo; he owns what he claims is a sportswear clothing line. No harm in that you might think, but you would be wrong.

Sure, he might trade in the occasional polo shirt and pair of sweat socks, but his wares lie overwhelmingly in the scanty pant department and the mind boggles as to how these garments relate to his tennis career, or ANY sport for that matter.

His stores are littered with photos of semi-clad nubile blondes who are clearly not engaged in any form of sport recognised by the Commonwealth Games.

For example, what sport is THIS, Mr Borg?

Ever seen an Olympic swimmer wearing one of these? 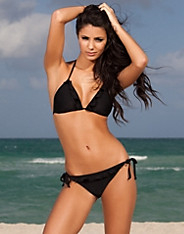 Probably not, but that did not stop the head-banded blond from trying to sell it as a sports attire item. To quote his arch rival: ‘You can NOT be serious?’ While it may all be rather tittilating, is there a sinister message behind the sexy facade? On the face of it, it is just a somewhat transparent marketing ploy, but look what I unearthed as I trawled back through the marketing history books of Borg Corporation Ltd – a master plan to thwart any encroaching Empire.

In around 2001 Björn Borg learnt that the Swedish birth rate was urgently dropping; he wanted to address the matter; he wanted more Swedes on the planet, he feared for the future native population – he wanted to reverse this trend. And how did he go about this? I hesitate, deliberate and apologise in advance for the revelation of this marketing campaign, but I will not censor it so you can see for your very own eyes the levels he stooped to in order to spike the Swedish birth rate. Alongside the provocative photos was this brazen strapline:

“Fuck For the Future”

(Don’t believe me? Then read this)

But now I have foiled his plan we can nip it in the bud as soon as British troops’ boots stomp on Swedish soil After the Invasion, THIS is how sportswear will be advertised on billboards:

Feel free to question The Umpire, Björny, but never EVER argue with The Empire. 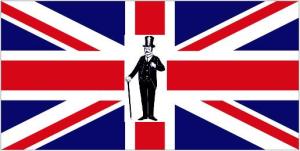