I am a chap who enjoys a pre-ablutions brisk stroll first thing every morning; Sweden is a country which, for the better part of the year, suffers long, dark nights. It was these two factors which came together and led to my discovery of the musical trend of this Nordic cultural coldspot.

My jaunt along the streets of Malmö would normally be a rather quiet affair, but the morning when this ‘cultural awakening’ dawned upon me was somewhat busier. At first all I could hear were shuffling footsteps and muffled, subdued voices. I could see across a cobbled street a small crowd of people, but the combination of dim light and morning mist clouding my monocle hampered my view. I could make out shabby clothes, I could make out unkempt hair, I could just make out ashen faces as the fading moonlight bounced off anaemic skin.

But what at first resembled a scene from a 1970’s zombie film..

Soon, and as the daylight slowly filtered through, morphed into..

Yes, that’s right – Kiss fans. The city was teeming with them.

It transpired that these fans were returning from the fallout of the previous evening’s rock concert. Observational skills I had honed on my ‘Introduction to Basic Spying‘ module led to the conclusion that one in every 20 people who were loitering in the city centre that day was wearing a blacker than black, newer than new Kiss t-shirt.

No matter where you turned, there was a Kiss t-shirt:

A quick side step:

Sweden has the 86th largest population in the world, i.e. not that many considering it is the 55th biggest country in the world. But check this out for the darndest of anomalies – Sweden is the THIRD largest exporter of music in the world. THE THIRD.

Anyone would be quick, yet foolish, to assume that this hefty statistic lies at the white faux-leather plateau-shoe clad feet of Abba.  The truth is that the current Swedish music industry covers the whole gambit, from native Sami people belting out the somewhat ridiculous sounding joik to the even more ridiculous underground drum & bass scene. In fact, the underbelly of talent in Sweden is so fat you’d think it would have been warned about developing Type II diabetes.

So why the devil do they not only import but embrace a band like Kiss? A band so arrogant they seem blissfully unaware that the rest of the world sees them as a joke and only like them to prove they understand irony.

But wait, did the United Kingdom not have its very own Kiss? A band of talented musicians? Yes. A band which performed dressed up on stage? Yes. A band which was more about the show than the musical performance? Yes. So what really is the difference between: 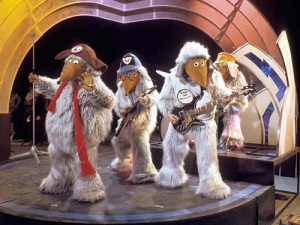 I can proffer no explanation as to why the Swedes have taken them so seriously, but one thing is for sure, while the world faces increasing austerity measures, Kiss will always have a healthy pension fund. I am baffled.

It is mid-July now so the winter is reering its ugly head; I am off to find some flat pack pine to assemble for the fire.

I am a genial fellow, feel free to leave a comment on the blog – I’ll be sure to respond. All comments, criticisms, complaints and compliments welcome.

A connoisseur, a charmer and a bit of a cad.
View all posts by The Dippylomat, Esq. →
This entry was posted in British Government, Culture, Ex pats, Foreign Office, Gothenburg, Humour, Music, Stockholm, Sweden, Travel, United Kingdom and tagged heavy metal, kiss, Rock, The wombles. Bookmark the permalink.